Modelling the link between aggregate income and carbon dioxide emissions in developing countries: the case of the Dominican Republic

Nurturing the conditions to achieve economic growth and development is a primary goal for governments across the world. But in so, doing attention has to be paid to the limits imposed on the pace of economic growth and development by various factors, including the potential adverse impact on the natural environment and the actions required to reverse the damages (Stern, 2015). Therefore, understanding the link between aggregate income and the environment is a pressing task for academics and policymakers (Greenstone & Jack, 2015).

The paper contributes by investigating the Dominican Republic, a country whose economy has been successful in implementing policies to preserve the natural environment vis-à-vis other developing countries. As an illustration, Diamond (2005) discusses concrete historical initiatives by the authorities in the Dominican Republic towards saving the natural environment, starting from the second half of the last century. The policies, including successful schemes to educate people about agriculture’s potentially damaging impact on the soil, reveal the preferences of domestic policy makers for encouraging a more balanced development (Faria & Sánchez-Fung, 2009). The precedent of implementing effective polices could also be the foundation to subsequently tackle other dimensions in the domain of environmental policy management, like reducing greenhouse gas emissions.

But there is no contribution assessing the level of pollution, as measured by carbon dioxide (CO2) emissions, and its relation to aggregate income in the Dominican Republic, i.e. investigating the existence of an environmental Kuznets curve (EKC). Pursuing that line of research could generate results that serve as a yardstick for gauging the success or otherwise of environmental policies. The investigation seeks to answer the following questions: Is there an EKC for the Dominican Republic? If so, what is the level of income at which the curve becomes negatively sloped, also known as the EKC’s turning point? Is that period related to the implementation of specific policies for safeguarding the natural environment?

The literature contains theoretical and empirical contributions, starting with the seminal work of Grossman & Krueger (1995). They estimate that for a cross-section of countries the turning point for various pollutants happens when real per capita income reaches US$8,000. But studies focusing on individual developing countries are more difficult to come by; for instance, Vincent (1997) tackles the matter and does not find evidence of an EKC for Malaysia. Therefore, focusing on a country like the Dominican Republic could help in learning from specific experiences on the evolution of greenhouse gas emissions as developing economies grow.

The rest of the paper proceeds as follows. Section II motivates the specification to investigate the EKC and runs the econometric modelling. The exposition relates environmental policies in the Dominican Republic to the findings from the empirical analysis. Section III concludes.

II. Estimating an environmental Kuznets curve for the Dominican Republic

The environmental Kuznets curve arises from the empirical observation of a negative link between the level of output and pollution. The seminal work is Grossman & Krueger (1995) and there is a substantial literature deriving from that work. The EKC can be split into several possible original effects that vary through time, as discussed by Brock & Taylor (2005).

The impact of economic growth can lead to an increase in pollution if the underlying activities rise in proportion to overall growth. If, on the other hand, the underlying activities either grow by less or more than overall growth pollution could decrease or increase in relation to economic performance. The empirical observation of a negative link between economic growth and pollution could imply that more advanced countries implement environment-friendly production techniques. And that is subsequently reflected in a lower level of pollution at higher income levels, generating the EKC. Ultimately, the nature of the link between income and pollution is an empirical question and what follows attempts to throw light on the matter by examining the case of the Dominican Republic.

The time series for the empirical modelling are obtained from the World Bank World Development Indicators and range from 1960 to 2010. The data are CO2 emissions in metric tons per capita (EN. ATM.CO2E.PC), gross domestic product (GDP) per capita (NY.GDP. PCAP.KN), population density (EN.POP.DNST), and annual % population growth (SP.POP.GROW).

The econometric analysis begins by estimating the following benchmark equation:

In equation 1 all the variables are defined as above and log denotes the natural logarithm of a series; 1, 2 are coefficients to be estimated empirically. If a Kuznets curve exists 1 > 0 and 2 < 0, meaning that CO2 emissions increase with output but decline after reaching a threshold level. The equation also contains a time trend.

Equation 2 reports heteroscedasticity and autocorrelation consistent standard errors (HACSE) below each coefficient. The diagnostic statistics under the equation are the goodness of fit (adjusted 2) and standard error of the regression (). All the coefficients in equation 2 are significant at the 1% level, excepting the time trend which is significant at the 8% level. The coefficients affecting the level and the squared value of GDP are positive and negative, implying that there is an environmental Kuznets curve for the Dominican Republic during the period under investigation. The analysis also runs a RAMSEY test to detect the adequacy of the functional form. The F-test examines the hypothesis that the coefficients on the squared values of the fitted model (equation 2) are zero and the hypothesis cannot be rejected {0.325(0.570)}.

Even if the functional form is correct, there could be reasonable concerns about the lack of ancillary variables in equation 2 so the analysis proceeds to exploring a more general model. The investigation considers the following extended EKC specification:

Equation 4 also reports HACSE below each coefficient. In equation 4 all the coefficients are significant at least at the 5% level, excepting the one affecting the rate of growth of GDP (Yt – Y–1), which is not statistically significant at conventional levels. The key coefficients on the level of output and on squared output carry positive and negative coefficients, confirming the existence of an EKC for the Dominican Republic. Also, the coefficients on the two income measures are smaller than those reported in equation 2, lending support to focusing attention on a more general econometric model. Figure 1 shows the residuals from equation 4 and they reveal a stationary pattern.

Given the importance of the results in equation 4, the investigation computes an F- statistic to test the hypothesis that both coefficients on real output per head are zero {β1=β2=0}: the hypothesis is rejected at the 1% {5.29(0.00).}. The 1% confidence ellipse shown in Figure 2 provides a visual impression of the range of values for 1 and 2 derived from equation 4. Figure 3 shows a cross-plot of the fitted values from equation 4 and the log of real income per head: the graph clearly reveals the EKC pattern implying the existence of a turning point in the income-pollution relationship for the Dominican Republic.

The turning point for the EKC, meaning the level of income at which pollution starts to decline, can be calculated using the following formula:

The calculation implies that for the Dominican Republic the turning point occurs in 1999. The estimated turning point is around the time when the Dominican Republic took concrete steps to boost the government’s capacity to regulate the natural environment. This relates to discussions in Dasgupta et al. (2002) and references therein, citing empirical evidence showing that the main factor driving reductions in pollution in countries reaching middle- income status seems to be changes in the pertinent regulatory framework (see also the discussions in Carson, 2010).

Going back to the results from the empirical modelling, the turning point in the EKC occurs around an annual real GDP per capita of US$1,600 -calculated at market exchange rates. Considering PPPbased GDP numbers, converted with current dollars, the turning point would amount to an annual real per capita income of US$5,300 according to data produced by the World Bank. The number is lower than the corresponding figure for the conventional EKC and could help to support evidence suggesting that the EKC has been flattening and shifting to the left (Dasgupta et al. (2002) label this a ‘revised EKC’). The EKC’s changing pattern could be the result of catch-up growth involving the adoption of environment-friendly technologies in developing countries. But, more likely, it is the outcome of specific policies aimed at preserving the environment.

In that regard, going back to the institutional context, after creating the Ministry of the Environment, the Dominican Republic has taken concrete steps towards reducing greenhouse gas emissions. Concretely, the National Committee on Climate Change and Clean Development Mechanism was created in 2008. The Committee’s mandate in cludes designing and implementing policies to mitigate and prevent greenhouse gas emissions in the Dominican Republic. The institution also keeps track of the compliance with commitments agreed with the United Nations concerning climate change, notably those derived from the Kyoto protocol. 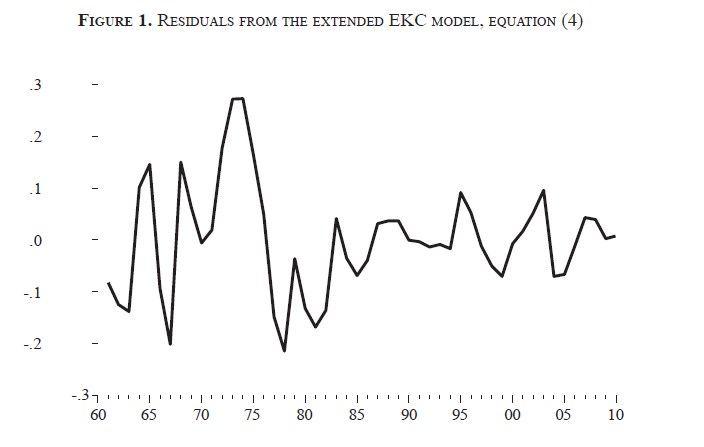 The Dominican Republic is also implementing an economic development plan compatible with climate change in order to keep greenhouse emissions under control, and recently passed new legislation to tax motor vehicles according to their CO2 emissions, a policy that has being difficult to implement in other Latin American countries. Another example of related efforts is the Dominican Republic’s success in reducing ozone depleting emissions of hydrochlorofluorocarbons by 10% during the three years preceding 2015 (according to the United Nations Development Program’s office in the country). World-wide efforts in that direction are partly supported by funding from advanced countries pledged via the Montreal Protocol, a treaty focusing on reducing substances that deplete the ozone layer.

The paper investigates the link between aggregate income and CO2 emissions for the Dominican Republic. The econometric analysis shows evidence of an environmental Kuznets curve revealing that the level of annual real per capita income at which CO2 emissions start to stabilise is around US$5,300 measured in PPP terms. The level computed for the Dominican Republic is lower than for conventional EKC estimates reported in the literature but in line with the revised Kuznets curve discussed in Dasgupta et al. (2002). The findings may contribute to substantiate the hypothesis that the curve has been flattening and shifting to the left, possibly due to catch-up growth involving the adoption of environment-friendly technologies and specific policies to preserve the natural environment. 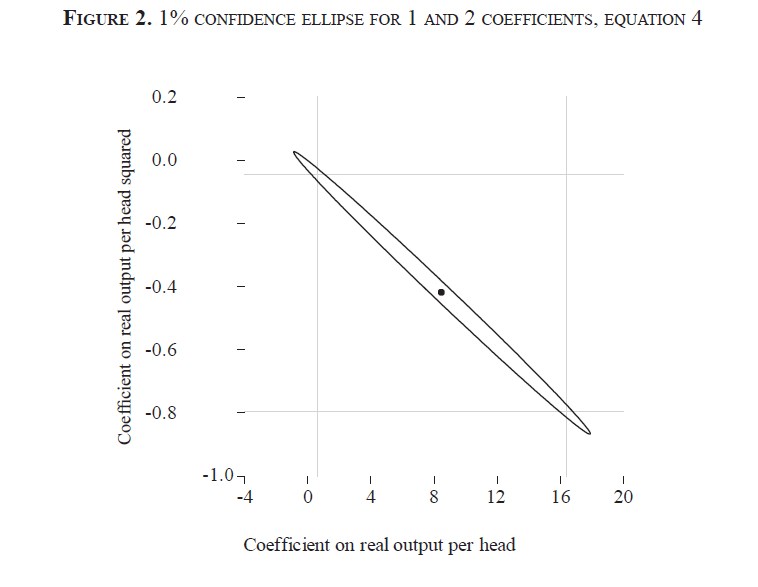 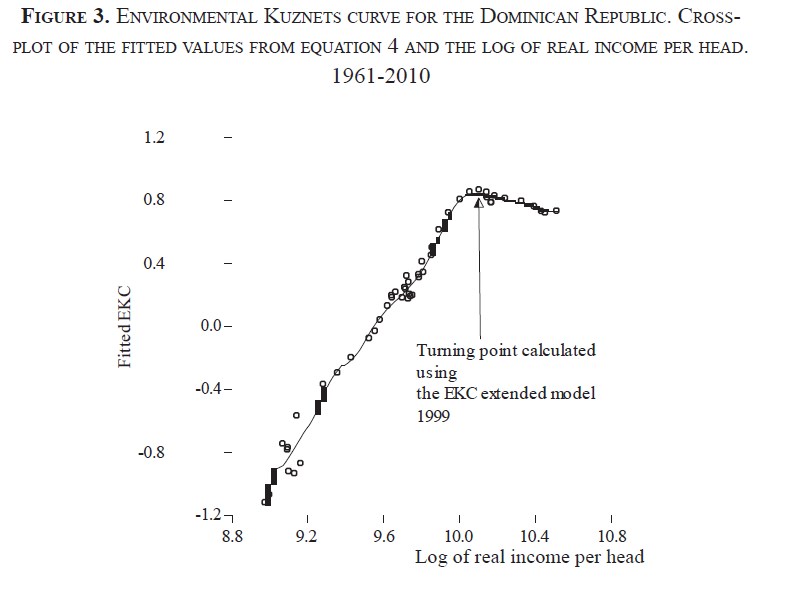 Faria, J. & Sánchez-Fung, J. (2009). The economy and the environment in the Dominican Republic and Haiti: What explains the differences? Discussion paper 2009/03, School of Economics. London: Kingston University.

Stern, N. (2015). Why are we waiting? The logic, urgency, and promise of tackling climate change. Cambridge, Massachusetts: MIT Press.